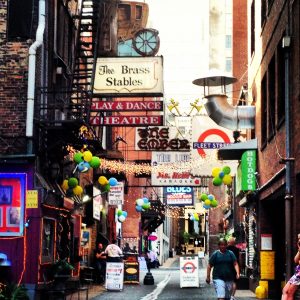 At the beginning of the 20th century, Printer’s Alley was home to a thriving publishing industry. The area was home to two large newspapers, ten print shops, and thirteen publishers. In fact, the last printer to leave the alley was Ambrose Printing Company in 1977.

Historically the center of Nashville’s nightlife, Printers Alley was, in its earlier days, a series of posts where men headed for the courthouse would hitch their horses. By the turn of the twentieth century Printer’s Alley had become the center of Nashville’s printing industry. At it’s peak around 1915, thirteen publishers and ten printers were located in the area serviced by the alley. Nashville’s two largest newspapers, the Nashville Banner and The Tennessean, were both located here at one time. The street contained hotels, restaurants, and saloons, many of which became speakeasies when Prohibition went into effect in 1909. Nightclubs started opening here in the 1940s, and the alley became a showcase for the talents of performers such as Boots Randolph, Chet Atkins, Waylon Jennings, Dottie West, The Supremes, Hank Williams, Barbara Mandrell, and Jimi Hendrix.

When Printer’s Alley first became a nightclub and entertainment district, sale of liquor for on premise consumption was illegal in Nashville (and throughout Tennessee). Restaurants and clubs in the alley served liquor anyway, often claiming it had been “brown bagged” (brought in by customers). Law enforcement agencies normally looked the other way on such sales. Liquor sales in restaurants were finally legalized in 1968.

One famous Printer’s Alley club was Jimmy Hyde’s Carousel Club, a jazz venue frequented by many Nashville musicians, among them a significant number of studio musicians who loved jazz despite spending their day backing country singers. These players would jam after the sessions were done and the music was often jazz. Among them were Chet Atkins, Floyd Cramer, Boots Randolph, Bob Moore, Brenton Banks, Buddy Harman and Hank Garland. Later, Randolph purchased the Carousel.

In 1998, murder came to the Alley when longtime club proprietor David “Skull” Schulman was murdered by a robber shortly before his club was due to open.